“Early settlement patterns on the American frontier often reflected the hopes of religious idealists’ of creating new social structures upon the sparsely inhabited land.  Although widely divergent in theology, religious groups were alike in their desire to forge new, faith-based societal frameworks.  Early American communities such as Kirtland, Shaker Heights, and Nauvoo are cultural artifacts that reflect the disparate visions of religious groups. Salt Lake City is arguably the most successful, functional community founded on religious ideals based on longevity. Choices were made concerning spatial hierarchies and land distribution that reflected collective values.  Because their urban plans controlled settlement patterns, these communities’ faith-based beginnings remain a part of the landscape today.”

With this collaborative statement of my distinguished colleague, Michael Hathorne, and mine as a backdrop, an hour and a half contemplation and discussion among latter-day urbanists recently took place in the shadow of the everlasting hills surrounding downtown Salt Lake City during CNU 21.  As moderator of the panel of faith-based urban professionals gathered to the west, my bona fides were as developer of Kentlands, a pioneering, traditional neighborhood development in the Maryland suburbs (which celebrated its twenty-fifth year of birth in 2014). Listening to my panel colleagues as they outlined their thoughts on community to me in the weeks leading up to the forum discussion in Salt Lake City, I retrospectively compared the tug of faith that must have nudged Aristotle 2,300 years ago and surely heavily influenced mid-nineteenth century utopians, with my own introspective promptings that pestered me day and night in 1988.

“The liberal man will need money for the doing of his liberal deeds, and the just man too will need it for the returning of services; and the brave man will need power if he is to accomplish any of the acts that correspond to his virtue, and the temperate man will need opportunity; for how else is he or any of the others to be recognized?

But the man who is contemplating truth needs no such thing, at least with a view to the exercise of his activity; indeed they are, one may say, even hindrances, at all events to his contemplation.

Art is the well doing…of what needs doing.”

All my life I have been in love with homebuilding, the business of my ancestors; it is something in my DNA. A soul-numbing dreariness of the thousand-shades-of-beige subdivisions slung like hash across the suburban landscapes seemed to a penance the country had to endure for the Vietnam War. Repentant, though not discouraged, my soul took solace in believing I could do better. I built a few houses with real front porches and real clapboard siding: Mom, apple pie, and the street I grew up on in Bethesda. Not a complicated business plan, but a truthful and powerful one that struck chords in the heart and coincided with the swelling confidence and wallets of the Reagan Revolution sweeping the country. I had discovered a nascent niche in the market and was soon building houses here and there, and then everywhere. I realized my customers wanted everything I saw in my head and felt in my heart, and that I was adding to my plans as fast as my pencil and building permit changes would fly (sometimes faster!): the setting, the scale, the sidewalk, the place. They even wanted the dog on the hearth, if it was an option. They wanted everything that made a whole community and what I was then subconsciously marketing as neighborhood.

Fast forward a few years – Kentlands was already unique in 1988 when I bought it: the lakes, the woods, the buildings, the land. It had charisma – a divine gift.

Charisma is an ineffable aura that derives from spiritual qualities that not only elude finite definition, but also cannot be purposely created and cannot be copied. When man-made places have charisma, it is not only building materials or arrangements that give them that special magnetism. It is the spirit of those who made them, and of those who dwell therein. In such places, man, structure, and landscape become one and moves the person from deep within to become more than otherwise possible. Charisma is a spirit-stretcher and, being solely spiritual in essence, might be said to be the language of God.

Most of the focus of community building in the real estate industry is, as it was in 1988 when Kentlands was given birth to in a barn, still given to engineering, traffic control, the environment, the ratio of housing to shops, the precise number of “feet on the street.” This is done to meet sophisticated formulas of generating ROI. However, those qualities that most define the nature of our being – our humanness – are rarely considered and almost never addressed as value to the bottom line by the industry. 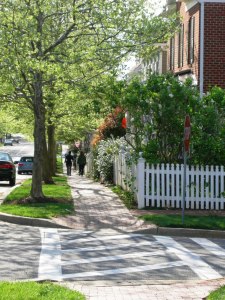 Kentlands was blessed with an enormous range and depth of creativity of its founders, of which there were many. It enjoys an authentic uniqueness because of the unabashed love of those who worked to bring it into existence. Kentlands projects a depth and breadth of concern for the individual more than other competing and contemporary communities do. Think of small towns you may have visited and how you marveled at their warmth, charm, and civility. Remarkably, this is what Kentlands has been able to emulate, surrounded by miles upon miles of dreary, suburban landscapes of metropolitan Washington, DC.

In our passion to escape the big cities to find a better life, we left behind the things that make life better. Across the United States, families want to return in lifestyle and desire to the life patterns of the ‘American Dream.’ Muddled and obtuse, it has become an ideal almost bereft of meaning and context within the ironic interpretation of a 2013-fractured democracy.  And so as if wishing to put as much distance as we can between us and ‘The Situation Room,’ and ‘Closing Bell,’ we want to go even further back in time. This is especially true of the Millennial, or so-called ‘Generation-Y’ who seem to want to find that time when most of a person’s aspirations and interests were fulfilled within the boundaries of the community in which a person dwelled, and when public places and buildings serving civic and social purposes reflected loftier purposes and neighbors looked out for and cared for one another rather than peeking through window blinds in paranoia, heads ducked low. 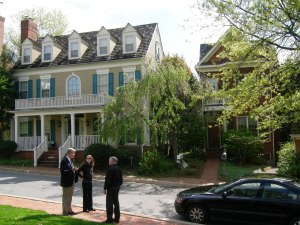 There is much about Kentlands that can be criticized for falling short. Unlike the City of Enoch, it is not perfect. But perhaps the most important thing of value I have learned that was created there is simply when good design is paired with freedom of spirit, behavior is affected in extraordinarily positive and uplifting ways. A sense of ‘ownership’ of the community is claimed and taken to creative heights in its own way by every resident, merchant, and tenant occupying their space within the boundaries of the place. Kentlands still evokes strong emotions in me, just as it did when I first laid eyes on it as Mr. Kent’s washed-out, utopian experiment in 1988. It subsequently has become a new and greater experiment in building a modern American real estate development in a new way; a timeless way. The Kentlands experience has taught me that beauty, art, the well-doing of what needs doing is a process that brings order out of nothing but ourselves; it cannot be attained, but will happen of its own accord if we give it the freedom to do so.

As a truthful missionary would say: “Don’t believe me. Go and find out for yourself.”